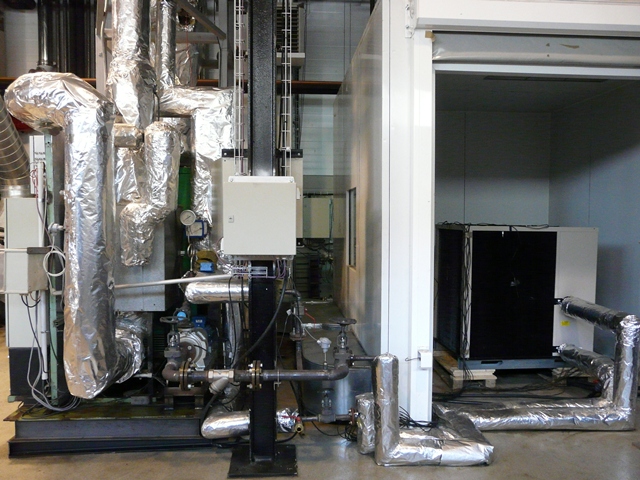 The Research Group in Applied Thermal Engineering CREVER has a test bench for small thermal power equipment (100 kW), consisting of:

Thermal energy is generated by a thermal oil boiler which operates between 80 °C and 300 °C.

The hot water is generated by means of an exchanger oil/water and has a working range between 40 °C and 120 °C.

The cooling is performed by two air-refrigerants with constant speed fans and one with variable speed. For temperatures below room temperature, the bench has a compression machine that can work at temperatures between 4 °C and 30 °C.

The flow measurement is performed with electromagnetic flowmeters and the temperature with a PT-100 probe. In the air cooled, the temperature and humidity control is performed by an UTA. For control of flow rates and temperatures, the SCADA has PID modules that act on the positioning of the VCT and/or frequency inverters.

The control system keeps the average temperature deviation below +/- 0.2 K, and the lower flow at +/- 1%.

Equipments can be tested in the branch: